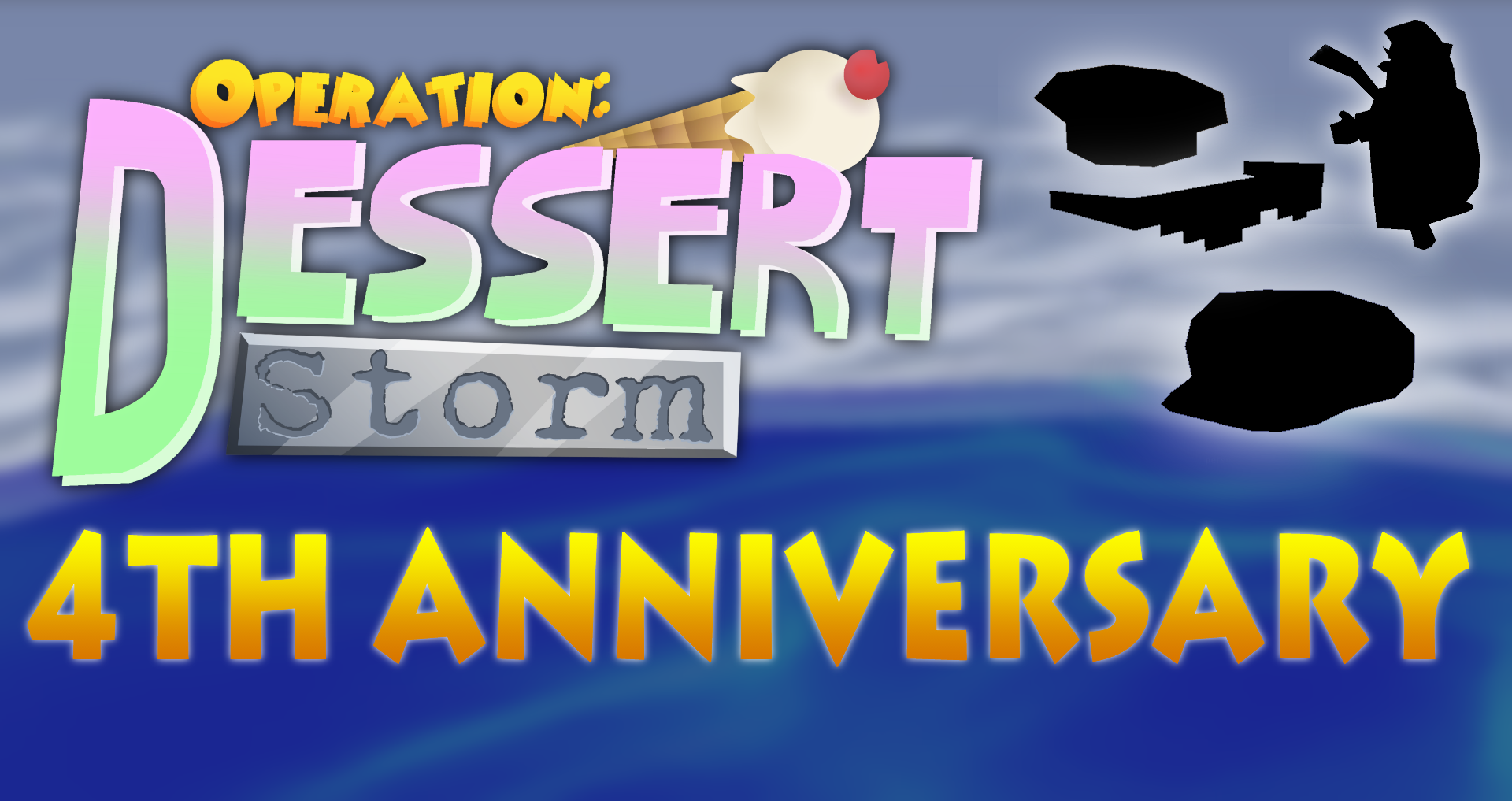 It was on this day four years ago in 2016 that we released Operation: Dessert Storm to the public. A lot has happened since then, and there are no words for the amount of gratitude we have for everyone who has ever logged onto the game and played it. Four years is an incredibly long time for a Toontown server to be up and running, and while we went through some tough times in the past, the newly reunited ODS team is back for more. Yesterday we delivered some brand new Christmas themed accessories just in time for holiday festivities, and there is more where that came from. But first, before we discuss the future of ODS, we are going to take a look at our past and talk about some of the most important updates.

Starting things off strong, we have the Techbot Headquarters update which was released on the 26th of March in 2017. This was one of the biggest milestones in Toontown history, as it was the first new Cog Headquarters since Bossbot HQ released in 2008. With this update, the gruesome Techbot Server Rooms were also added for players to test their might in. Sitting across from the entrance to the Server Rooms is the unfinished lobby leading to the Chief Information Officer. Techbot HQ served to set expectations for the quality of the updates later to come. These days, the cracks are starting to show around Techbot HQ, and the joints have started to lose their oil. It is no secret that compared to the more recent artistic changes made to the game, Techbot HQ is looking a little barren.

Pushing the technical envelope even further than ever, Operation: Dessert Storm was ported to mobile devices running Android, making it the first and only ever server to be compatible with phones and tablets. On April 18th of 2017, applications for Android beta testing were released. Ten days later on April 28th, Operation: Dessert Storm was available to a whole new user base, allowing people without computers to once again relive the Toontown experience right in their pockets. On June 11th of 2017, Operation: Dessert Storm was approved by Google to be released officially on the Google Play Store, completely free and without ads. To this day, this is still the greatest achievement for the game and we are beyond happy with how many people have been reunited with Toontown because they found it on the Play Store out of the blue one day. Toontown on mobile has still not reached its maximum potential, and after three years, there is definitely room for a performance increase. This is part of the challenge of maintaining a game like this for so long.

June 15th of 2017’s Technical Update brought a lot of great stuff to the game. The start off with the most important, Skipper McHop made his debut hanging around in Toontown Central outside the Toon Hall. Skipper gives players who are already familiar with Toontown’s first and second playgrounds the opportunity to jump right into the action and skip straight to Daisy Gardens. In terms of Quality of Life, this is huge. Also included in this update are two new badges, one of which being “All Your Base”, a reward for liberating 150 Toon buildings from the Cogs. This is a reference to the now famous Toontown music video from thirteen years ago featuring a song created with the intro cutscene from the video game “Zero Wing”. This is the oldest Toontown video on YouTube and is a legend within the community, so it was only fitting that we added a tribute to it into the game. The other badge added in this update is a pretty unique one called “Lord of the Rings” which is given as a reward for winning the Ring Game with a perfect score 25 times. Along with the badges and skipping feature, we also added toontasks for the Techbots and Techbot invasions.

Another first for Toontown history, four brand new gags were added to racing. The TNT, the Quicksand, the Geyser, and the Storm Cloud. Alongside this, racing controls were improved, making racing the tightest and most responsive it has ever been in the history of Toontown. Prices for accessories were nerfed, making it far easier to customize karts.

On August 4th of 2017, in-game movement received a huge buff in the form of driveable karts that allow players to hold the Insert key and use their kart anywhere in Toontown. Hitting a Cog with a kart will destroy it, but it will cost 10 Laff points. Using this feature, players can join up and come together to host races on the streets of Toontown. For those feeling like walking is too slow, this is a great choice for speeding down the streets to turn in those Toon Tasks.

Twinkle Cottontail made himself known throughout Toontown by offering brand new rewards in the form of new clothing and colors for rabbits in exchange for bringing back his eggs which have spread all throughout Toontown. Some eggs became corrupted and rotten after making their way to the Cog Headquarters and gained malicious properties. Twinkle Cottontail and his eggs were added to the game on April 1st of 2018.

After two years without a proper update filled with content, October 24th marked the beginning of a new era for Operation: Dessert Storm. It has long been known that Techbots were in need of a major upgrade, and at last, they received it. Every Techbot now has its own unique model and they’ve never looked sharper. A memo by the C.I.O. ordered that the Techbots be evaluated and upgraded for better performance in the field, and that is just what happened. This update is symbolic of the new love and care that is finally being given to ODS with the consistency it deserves. Ever since the completion of the Techbot models, we have been striving to put them to use, which brings us to today. It is finally time to talk about the new features coming to Operation: Dessert Storm in celebration of four years.

Four Releases on Four Weeks for the Four Years

For those of you who have been waiting for a new quest to take a stab at, we are proud to announce the newest gameplay expansion since Techbot Server Rooms: Operation: Banana Split, a brand new update centered around thwarting naval developments by the Cogs which threaten the shores of Donald’s Dock. Only one thing divides the impending threat of naval invasion into the coastal stronghold of Toontown: Plankton Port, a Toon Resistance outpost built out on the sea near Donald’s Dock manned by the one and only Captain Carl. Your mission is to team up with your friends and help the Toon Resistance squash the most intricately coordinated assault on Toontown since the Cogs first invaded. You have a little while to prepare yourself for when this update hopefully washes ashore quite soon, starting off 2021 with a blast. Please look forward to more information regarding this update in the coming weeks.

Catching Up with the ODS Team

Things are looking bright for ODS. Recently, former modeler and composer Senuvara has joined the team once again.  There are plans to re-mix the soundtrack and create new tracks to fit updates where they need them. As soon as these tracks are mixed and ready for release, we will be uploading the whole soundtrack to our YouTube channel. To keep up to date with the news that might not be posted on our website, please make sure to join our Discord server (now with a sweet vanity URL!), subscribe to our YouTube channel, follow us on Twitter, and follow us on Instagram.  In November, we started compiling footage of features in the game and uploading them in short collections to our YouTube channel known as “ODS Featurettes”. We are hoping to spread awareness of features that may not be widely known and increase interest in the game with them. On Instagram and Twitter, we are still looking to build up the “Meet The Toons” series of posts detailing information about different NPCs in the game and adding a little bit of backstory to some lesser known residents of Toontown. We also plan to make a similar series of posts for the Cogs titled “Know Your Enemy”.

The ODS team wishes that everyone has had a very Merry Christmas and enjoyed their holidays. It has been a long and hard four years and has taken us on a ride that we could never have possibly imagined. Still, through everything we have been through, happy and sad, thick and thin, we would never trade the dedication and support from fans for the world. Additionally, we would like to thank everyone who has ever contributed to ODS in any capacity in the four years we have been running. To all the other Toontown projects out there, we wish you all the best of luck in the future and support your endeavors to keep the game alive, and hope you all were able to enjoy your holidays despite the global pandemic we are all facing. Thank you to everyone who has helped keep Toontown alive and especially to satire6, the anonymous former Toontown developer who has contributed the original source code and assets to the community for open use. Thanks to these contributions, we have been able to create new tools for the community to use to improve their respective projects. The original level editor which was accidentally included in an early version of Panda3D (Toontown’s game engine) has been modified for modern usage with Toontown projects. Along with the level editor, we also have a new version of Robot Toon Manager, an application used by original Disney staff to create promotional materials for the game, such as character renders and Toon News pages. Both of these modified programs have been worked on in collaboration with others in the community by Disyer, the lead developer of Operation: Dessert Storm. We will continue to support the community and keep Toontown alive in every way possible, including supporting other projects, community artists, and anyone else who decides to add to our epicenter of creativity created by the folks at Disney Interactive all those years ago. The fourth anniversary of Operation: Dessert Storm marks an advancement for us all and is proof that Toontown is still alive and well.

To our players, thank you for your continued support despite the severe lack of content in the past. We promise it isn’t going to stay that way forever.

To the developers and creators in the community, we support you no matter what.

To everyone reading this, Toons of the World, Unite!